8 Dec 2011 | Email | Print |  PDF
Net#work BBDO has created an ad shot in full 3D for Mercedes-Benz, promoting its Night View Assist feature, which will flight before 3D films at cinemas during the year-end holidays.
Comments Net#work's Bruce Anderson and Rob Rutherford, "We are proud that this is the first filmed 3D ad in South Africa [for a South African car manufacturer]. It's a mini-thriller and has been created with the best production values. It will add to the cinema-going experience for audiences, as well as cementing Mercedes-Benz's core brand values of innovation and safety."

The spot opens on a dark, eerie road and, in a short suspense-filled journey, Mercedes-Benz's infrared technology shows how it helps one to see 'the danger in the darkness'. In typical 3D fashion, this is demonstrated in a manner intended to startle - a horse leaps straight out of the screen at cinema audiences.

The Night View Assist commercial was conceptualised by Anderson and Rutherford, and produced by a team that includes director Rob Malpage from Frieze Films, Visual Impact, Left Post Production and Ministry of Illusion.

The ad was previewed to Gauteng journalists during two screenings this week, one in Pretoria and one in Johannesburg. 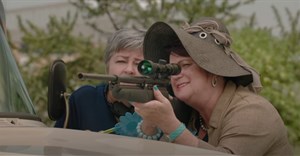