#YouthMonth: Behind the camera with BBC's Ros Atkins

By: Leigh Andrews
He has broadcast from locations as diverse as an informal settlement in Soweto, a hospice in London, a prison in Indianapolis, a bookshop in Tel Aviv, a Nazi exhibition in Berlin, a maternity ward in Lagos and a classroom in Tanzania and has a strong international following. Here, BBC's Ros Atkins shares advice on how to have a career with similar global impact. Atkins, currently real-time news presenter for BBC World News’ Outside Source, has hosted coverage of many breaking global stories for BBC News. The two that stand out most for him are broadcasting amongst the crowd during Barack Obama’s first election victory and inauguration in 2009, and being on air among the crowd that gathered outside Nelson Mandela’s former house in Soweto on the morning after he died.

That’s just one example of his many stories with an African slant, others include the post-election violence in Kenya, the Africa Cup of Nations in Ghana and the FIFA World Cup in South Africa. Hardly surprising as Atkins, who grew up in Cornwall in the south-west of England, has also lived in the Bahamas, Trinidad and Tobago, and worked as a researcher, journalist and DJ in Johannesburg for a stint after university.

“Inevitably you are focused on the practicalities of the job, but it’s important to take a moment and reflect on the importance of what you’re witnessing,” says Atkins.

He has also been a speaker at the local IAB Digital Summit, so, has a clear connection to the continent. This father of two daughters also resonates with our audience, as he feels strongly about giving females the voice they deserve in society. That’s why he’s behind a number of documentaries for the BBC, his most recent being All That Stands in the Way, about gender inequality through the lives of four teenage girls in Iceland, UK, Lesotho and Jordan. Watch the excerpt embedded below for more:

He clearly loves: “having the chance to learn about what’s happening in our world, and to play a part in helping BBC World News share and explain what we know.” Here, he talks us through his career highlights so far and shares exclusive career advice to budding broadcast journalists…

1. Talk us through your early broadcast career learnings and future aspirations.

I never imagined that I’d have the chance to develop and host my own TV show for BBC World News. I can genuinely say that if I could pick any job I can think of, I’d pick this one. I am very interested in the business of news, and the strategies needed to plot a way through a very turbulent time for journalism. I’m trying to get more involved in that – but it’s always a secondary pursuit after my responsibility to Outside Source.

2. What sparked your interest in broadcast journalism?

3. That’s for sure! Who do you turn to for career advice?

4. How can ‘newbies’ equipped with the book learning, but lacking the necessary experience make their big break in the broadcast industry?

That they do. Follow more of Atkins’ career highlights on Twitter and keep an eye out for him on BBC World News. 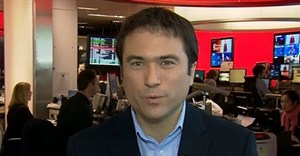