By: Ruth Cooper
What comes to mind when thinking of the sexiest most manly hero archetype? Brain surgeon? Sure. Fire-fighter? Of course. Air force pilot? Oh yeah (gotta love a man in uniform), but an astronaut - now that's just on another level. Or so the marketing team at Axe would like us to think, an astronaut trumps all in making the girls swoon.

And this is the reason why they have teamed up with the good space-cadet folk at Space Expedition Corporation (SXC) in coming up with the most epic global campaign and ultimate prize of all prizes. The chance for a select few to go where not many have been before, more than 100 kilometres into the ether, into space, the final frontier and the consequential opportunity to surely bag a member of the fairer sex.

The Axe-tronauts take to flight

Bizcommunity was lucky enough to be invited to the launch at the South African Space Camp in Parys, Free State, last week. This grand-scale launch had the whittling down of 30 eager space cadet phase one competition winners to six and then to three. These cadets were put through a vigorous training regime consisting of a ride on a G-Force Rotor, tandem skydive, and a dizzy-making, stomach-churning stunt plane ride. The lucky and fearless final three contestants: the shark-diving enthusiast Haroon Osman, the flight simulation maintenance engineer Dean Roddan, and 24-year-old Mandla Maseko, who hopes to be the first black South African in space, will now be sent to the Axe Global Space Camp in Orlando, Florida to compete for the one SA spot position along with contestants from 75 other countries. 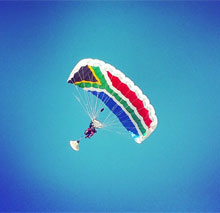 A trip through space and time

SXC, along with Virgin Galactic, are striving to make commercial space travel a reality as soon as next year. Currently an exclusive (it's just you and the pilot) one-hour space trip with SXC will set you back a cool million rand. However they are hoping as more companies come on board and interest manifests, this price should drop dramatically and, one day in the not-too-distant future, global travel will include space travel, a "faster, cleaner and quieter" form of transport. In theory, a trip from South Africa to Thailand may take only an hour and the views - damn, those will be truly spectacular. KLM Airlines have already seen the massive potential in this and have actively joined forces with SXC in revolutionising commercial global travel as we know it.

Truly the sky is no longer the limit and we applaud Axe SA in allowing one of our brave three to make history as the second South African ever to venture into space. Leaving as a man and coming back as a hero!

Ruth is the production manager at Bizcommunity. moc.ytinummoczib@htur