M&G editor is Media & Communications Woman of the Year

Ferial Haffajee, editor of a major national newspaper, is one of the nine winners of the 2004 Shoprite Checkers / SABC 2 Women of the Year Award and winner of the Media and Communications category.

Haffajee received her award at a dazzling gala event to celebrate women in South Africa, held at the Cape Town International Convention Centre, on Thursday 29 July 2004. 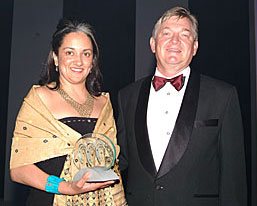 Ferial Haffajee became the first woman editor of a major South African newspaper when, aged only 36, she took over the editorship of Johannesburg-based Mail & Guardian in January 2004.

In the year South Africa celebrates 10 years of democracy and its third non-racial elections, Haffajee's appointment to this investigative campaigning paper born during the height of the anti-apartheid struggle, is a triumph for gender equality in South Africa.

An advocate of quiet and calm leadership, Haffajee now reports a two-thirds female contingency in the M&G newsroom and aims to nurture more investigate journalism in the M&G on delicate gender issues, such as the rate of rape and sexual violence in South Africa.

Writer of The Little Black Book, a directory of South Africa's top black business people, while still at the Financial Mail, Haffajee is currently compiling a women's version, to be released in October of this year.

Chair judge of the Media and Communications category of the Award, Kanyi Mkonza says Haffajee is an inspiration for young journalists throughout South Africa. "Haffajee has incredibly strong leadership qualities. Soft yet firm in her management style, she has been in the industry for a long time and is very aware of her role as a woman in media. She has brought more articles on gender issues into the media and is an encouragement to women entering this field."