12 Sep 2007 | Email | Print |  PDF
Delegates from a broad spectrum of industries came to the Axiz Auditorium in Midrand in August to attend the first EMS “Smart Rock” RFID seminar to be held in South Africa. 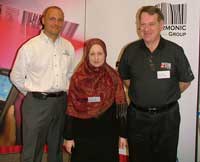 US-based RFID components manufacturer, Escort Memory Systems, a subsidiary of the Datalogic Group, has held 100 Smart Rock seminars worldwide this year, with the aim of educating businesspeople on the different types of RFID technology available, each one's pros and cons, and the different types of applications in which RFID has proven to be successful.

The seminar, which was organized by Harmonic Group, garnered very positive feedback from the attendees, who came from a wide variety of industries such as the retail, mining, manufacturing, hospitality, government and banking sectors.

“The seminar was all about de-mystifying RFID, explaining how it works and giving case studies to show exactly how it can be implemented successfully,” said Harmonic's MD, Barry Baetu. “We explained passive tags, active tags, readers and antennas and discussed how the technology can be used in conjunction with barcoding systems already in place.”

The main speaker at the event was EMS's Pietro Scanabissi, who gave a fascinating and sometimes hilarious presentation, including the RFID tag that he dropped into his drinking water and then read with the antenna through the glass to demonstrate the tag's readability under water.

NXP Semiconductors' Roger Lilley, one of the guest speakers at the event, discussed new developments in Near Field Communications (NFC) and new international case studies where NFC-enabled mobile phones are becoming a popular replacement for MiFare payments.

James Briggs of the RFID Institute of SA, an organisation which consults with companies thinking of implementing RFID technology and advises on procedures for implementing pilot procedures, ran through these procedures in his presentation to give delegates a framework on how to integrate RFID into their business processes.

Also featured was Nissan South Africa's Raymond Chegwidden, who recounted how his company has begun to use RFID in their production process.

“Once you understand how RFID works, it becomes easier to tell exactly where it will work cost-effectively and how to use it in conjunction with other technologies, such as CCTV and barcoding to get the best outcome,” said Baetu.

All the speaker's presentations are available for download by clicking on the “Downloads” page at Harmonic's website, http://www.harmonicgroup.com.

NextOptions
›
Email Print PDF
Republication of selected Bizcommunity content for non-commercial purposes is allowed if the original article is linked to with "Source: www.bizcommunity.com". Please click here for more information and to request permission.
Let's do Biz