11 Jun 2012 | Email | Print |  PDF
The nominees for The 2nd Annual South African Comics Choice Awards 2012, to be held on 10 July at Teatro, Montecasino, Joburg, have been announced. It has also been announced that Joe Parker will receive a Lifetime Achiever Award. 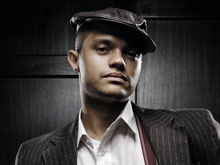 As 10 July approaches, the producers of South Africa's youngest comedy awards show are climbing the walls trying to keep secrets.

"All we are prepared to say at this point," said John Vlismas, "is that we have top, top comedy names involved, we have some intricate safety issues, some very talented dancers, and a disclaimer we are still trying to word. It's shaping up to be another spectacular evening, just try not to get any on your bow tie ... "

The SA Comic's Choice Awards allows the majority of professional local comedians to register, vet each other and vote for who they believe should be honoured with one of six Waldo statuettes.

The show itself is unique, with no speeches allowed, only short comedy sets by each winner, as well as a mental concoction of comedy variety that won't be seen anywhere else.

"I'm not the creative side if this team, but I do know that once you put one of the best comedians in the country together with his award-winning sister, and let them collaborate with the acts they love and admire - and add to that the budget provided by Savanna - you are bound to be part of something very special. We are on the edge of our chairs, but from what we've heard and seen so far, book now, said Taffia Keight.


A lambasting second to none

This year, the team also presents a preliminary event - "The Grilling Of A Lifetime" where a "board of directors" chaired by Mel Miller, will deliver a lambasting second to none, tearing the 2012 Lifetime Achiever recipient apart at Parkers on 26 June.

"This is a new addition to The Comic's Choice Award Itinerary", said Keight. We wanted to honour the lifetime recipient in the most loving way possible for the comedy industry - we have gathered a board of comics who have made a name for themselves by being outspoken, controversial and uncensored. This event is rated R, not for the faint of heart, but promises to be unforgettable."

The Comic Of The Year Award