18 Aug 2015 | Email | Print |  PDF
Entries are now open for the next Sunday Times FNB Shark Tank - a Dragon's Den-type contest exposing KwaZulu-Natal's most ambitious entrepreneurs and their business plans to the scrutiny of some of South Africa's leading business minds...in the 'Shark Tank'. 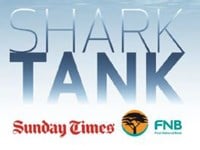 The previous Shark Tank event attracted nearly one hundred entries, shortlisted to ten very ambitious finalists says Greg Ardé, editor of Sunday Times' SPICE. He is expecting the new competition to be even more ferocious because of the prize: the winner will receive coaching from some of the province's best business minds, media exposure and bank assistance from FNB, to the value of R150,000.

"The Sunday Times and FNB are putting their considerable muscle into this initiative. We need to encourage entrepreneurship in KwaZulu-Natal. The finalists will get great exposure through the Shark Tank. The winner will also get financial support and advertising resources that could make a real impact in driving a market for their business," says Ardé.

Preggie Pillay, FNB Business Provincial Head in KwaZulu Natal, believes that the partnership is an extension of the bank's commitment to enabling entrepreneurs. "We recognise the achievements of successful entrepreneurs in the province and acknowledge that success is not limited to major commercial endeavours, but that a wide spread of organisations can contribute to the strength of the local economy. It's not often that one gets the undivided attention of eight business leaders in one room."

The new judging panel will draw on most of the same judges as the first and other equally prominent business minds.

Entries close at the end of September 2015. The top 10 finalists will be notified by 20 October 2015. For more information, go to www.sundaytimes.co.za/sharktank.