By: Nicci Botha
Technology will breathe new life into an old mine when Syama gold mine in south Mali is becomes the first fully-automated mine in the world. Mining at Syama’s open pit operations were completed in 2015, although there was still a substantial ore body beneath the pit. The question was how to access it, said John Wellborn, managing director and CEO of Resolute Mining, at the Investing in African Mining Indaba. The company owns an 80% stake in Syama through Societé des Mines de Syama (Somisy). The Malian government owns the remainder.

The orebody geometry and geotechnical conditions at Syama is suited to sublevel caving (SLC). A key determinant of successful caving is achieving routine and predictable production from stoping.

Therefore, stope design was used as the major consideration for the level layout with the design also addressing ventilation, drainage, geotechnical considerations, cost and timing. When the infrastructure requirements were established the level was then linked to the decline access design.

“A sublevel cave (SLC) lends itself to repetitive activity,” he said.

“We were looking to maximise the value of our assets and increase efficiency . The original design was for a manual SLC. We looked around at what was happening in the industry and were convinced that automation is the way to go.”

Wellborn said that he believes rather than reducing jobs, automation creates jobs by upskilling and empowering the workforce.

The mine will be powered by a hybrid solar grid, which will be operational in 2020. Power supply has always been an issue for mines in remote locations. “For 30 years, Syama has been reliant on diesel power generation. We looked at available solutions. The actual power requirements create the need for a mini grid, which is sustainable and leaves a legacy that benefits the community,” he said.

Wellborn explained that the SLC will eventually run off battery power, making it a quiet mine.

Syama was commissioned in December 2018 and will reach full automation in September 2019.

Nicci Botha has been wordsmithing for more than 20 years, covering just about every subject under the sun and then some. She's strung together words on sustainable development, maritime matters, mining, marketing, medical, lifestyle... and that elixir of life - chocolate. Nicci has worked for local and international media houses including Primedia, Caxton, Lloyd's and Reuters. Her new passion is digital media. 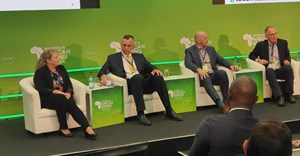