The maps illustrate the favourite terrain of elephants throughout Southern Africa, and the human and natural obstacles that make it impossible for populations in different regions to link up. The academics are both lead authors of a paper published in peer-reviewed science journal PLOS ONE that sets out and explains the series of maps.

Details of the whereabouts of the animals were drawn from the world’s largest database on elephant movement, which has been housed at UP’s Conservation Ecology Research Unit (CERU) in the Department of Zoology and Entomology since 2001.

“The maps help us to consider the prospects of how we can improve the connections between the different protected areas that harbour elephants in Southern Africa,” says Prof Van Aarde, who is also the Chair of CERU.

About 80% of all savannah elephants live in Southern Africa (which spans an area of seven million square kilometres) within 900,000 square kilometres of eight separate clusters of protected land across eight countries. Each cluster has a primary protected area (like the Kruger National Park in the case of the Limpopo cluster) at its core, and is further surrounded by or connected to other protected areas.

The researchers mapped where elephants currently roam, where there are similar suitable habitats in terms of their preferences for specific vegetation and terrain, and areas where they could link up with other populations. They also noted natural obstacles such as rivers and hilly terrain, and human factors such as fences, settlements, grazing land and crop pastures that limit movement.

To add detail to these maps, the research team used 1.2 million data points from the CERU database. It was gathered over 20 years with telemetric collars and other tracking devices to monitor the movements of 261 elephants across Southern Africa. “The maps tell us how and where elephants use a landscape, where they want to go and what they prefer,” Prof Van Aarde explains. “They also help to visualise how fences restrict the movement of elephants on a local scale.”

Prof Van Aarde adds that protected areas have played a huge role in increasing African elephant numbers. However, he is increasingly worried that the compression of elephants into designated conservation areas might also create problems.

“Confinement to protected areas and the fragmentation of the once continuous population have adverse demographic and genetic consequences for elephants; this goes against the first principles of conservation,” Prof Van Aarde and his collaborators wrote. “We urgently need a solution.”

Reconnecting natural areas and enlarging protected estates are possible solutions, and align with the guiding principles of the Global Deal for Nature, a plan proposed by researchers that outlines what it will take to maintain a liveable planet. Connecting existing protected areas with one another could ensure the viability and continued existence of populations of large-bodied herbivores, including elephants. 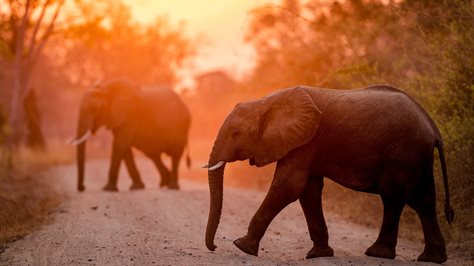 The research team realises that great effort and socio-political will is needed to make such connections.

“The effort will be worthwhile, as it will help to resolve many issues that people have with elephants as so-called ‘problem animals’,” Prof Van Aarde notes. “This includes degradation of the landscape in certain areas.”

“Our current network of protected areas provides a foundation, but long-term population stability will be difficult if elephants cannot disperse into other suitable areas,” Dr Huang says. “Therefore, we must protect the connections that we have identified in cooperation with local communities and governments, so that the animals can do so. That’s among our best chances at a sustainable future for elephants.”

Prof Van Aarde says the effort is about more than elephant conservation, and that the giants of the African bushveld are so-called “umbrella species” for the conservation of Southern African wildlife at large. The University of Pretoria (UP) is a seven-campus public university with its largest campus in the heart of Hatfield, the picturesque diplomatic hub of South Africa's capital city. We're proud to stand among the world's leading research universities.