#OnTheBigScreen: What to expect in July

By: Daniel Dercksen
Film buffs are in for a real treat in July with big screen entertainment offering live opera, unconventional horror, sensual escapades, a supervillain and his unruly minions, the mighty Thor and his magical hammer, a fearless bomb expert, pets with superpowers and an uplifting documentary that celebrates just how irrepressible the human spirit can be.

When Australian composer Brett Dean’s Hamlet had its world premiere at the Glyndebourne Festival in 2017, The Guardian declared, “New opera doesn’t often get to sound this good … Shakespeare offers a gauntlet to composers that shouldn’t always be picked up, but Dean’s Hamlet rises to the challenge.” This riveting contemporary masterpiece can now be experienced live at Cinema Nouveau from 1 July, with Neil Armfield, who directed the work’s premiere, bringing his acclaimed staging to the Met Opera.

Alex Garland's haunting Men will shock you to the core! In the aftermath of a personal tragedy, Harper (Jessie Buckley) retreats alone to the beautiful English countryside, hoping to have found a place to heal. But someone or something from the surrounding woods appears to be stalking her. What begins as simmering dread becomes a fully-formed nightmare, inhabited by her darkest memories and fears in visionary filmmaker Garland's feverish, shape-shifting new horror film Men that is unleashed on 1 July.

From 1 July fans of Minions: The Rise of Gru will discover how the world’s greatest supervillain first met his iconic Minions, forged cinema’s most despicable crew and faced off against the most unstoppable criminal force ever assembled in. It features more spectacular animated action than any film in Illumination history and is packed with the franchise’s signature subversive humour.

On 8 July the God of Thunder embarks on a journey unlike anything he’s ever faced in Thor: Love and Thunder. His heroic efforts are interrupted by a galactic killer known as Gorr the God Butcher, who seeks the extinction of the gods. To combat the threat, Thor enlists the help of King Valkyrie, Korg and ex-girlfriend Jane Foster, who — to Thor’s surprise — inexplicably wields his magical hammer, Mjolnir, as the Mighty Thor. Together, they venture out on a harrowing cosmic adventure to uncover the mystery of the God Butcher’s vengeance and stop him before it’s too late. Directed by Taika Waititi, who helmed Thor: Ragnarok, it stars Chris Hemsworth and Natalie Portman.

Emma Thompson stirs up some heated controversy in Good Luck To You, Leo Grande as a retired schoolteacher, is yearning for some adventure, and some sex. Good sex. And she has a plan: she hires a young sex worker named Leo Grande. Whilst her husband Robert provided a home, a family, and something resembling a life, good sex was never on offer. But he’s gone now, and Nancy has a plan: she will find adventure with a sex worker named Leo Grande. In an anonymous hotel room, Nancy greets Leo. He looks every bit as good as his picture, but what Nancy wasn’t expecting was conversation as well as fornication. The film will be screened from 8 July and features Daryl McCormack as Leo Grande, who recently finished shooting on the final season of Peaky Blinders.

A regular day at work transforms into a thrilling, high-stakes puzzle with a ticking clock in the hypermodern cyber-tech action/thriller Hot Seat. Orlando Friar (Kevin Dillon) is a former hacker trying hard to turn his life around before it falls apart. When an anonymous caller tells him a bomb under his seat will explode unless he completes a series of impossible digital bank heists, what began as a mundane workday quickly swells into a suspenseful rollercoaster ride that will force Orlando right back into the kind of shady tech manoeuvres he’s been trying desperately to leave behind. Orlando's only hope is veteran bomb tech Wallace (Mel Gibson) and his young maverick partner Jackson (Eddie Steeples). directed by American producer/filmmaker James Cullen Bressack and releases in cinemas on 22 July.

In the animated DC League of Super-Pets, Krypto the Super-Dog and Superman are inseparable best friends, sharing the same superpowers and fighting crime in Metropolis side by side. When Superman and the rest of the Justice League are kidnapped, Krypto must convince a rag-tag shelter pack—Ace the hound, PB the potbellied pig, Merton the turtle and Chip the squirrel—to master their own newfound powers and help him rescue the Super Heroes. Released on 29 July, Dwayne Johnson stars as the voice of Krypto the Super-Dog.

Having escaped starvation and tyranny in their homeland of Zimbabwe, four refugees, Tinashe, Pardon, Joseph and Marlvin have conquered the odds to become South Africa’s sommeliers in the riveting documentary Blind Ambition, that will be screened from 29 July. Driven by relentless optimism, a passion for their craft and unshakeable national pride, they form Zimbabwe’s first ever wine tasting team and set their sights on the coveted title of “ World Wine Tasting Champions”. From the moment they arrive in France to compete, this team of mavericks turns an establishment of privilege and tradition on its head. A truly uplifting documentary that celebrates just how irrepressible the human spirit can be.

Daniel Dercksen has been a contributor for Lifestyle since 2012. As the driving force behind the successful independent training initiative The Writing Studio and a published film and theatre journalist of 40 years, teaching workshops in creative writing, playwriting and screenwriting throughout South Africa and internationally the past 22 years. Visit www.writingstudio.co.za
Read more: men, Daniel Dercksen, Dwayne Johnson, #onthebigscreen, new film releases, Taika Waititi 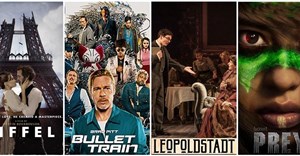