The awards ceremony was replete with electrifying performances, moving acceptance speeches and tributes. True to tradition, the winners' list reads like a rollcall of Mzansi’s finest.

Celebrating the LGBTIQ+ community in style

Progressive institutions that pioneered tolerance and inclusivity also got their rewards at this year’s event. The Gauteng Department of Community Safety was recognised as the Best LGBTIQ+ Initiative: Public Sector for its LGBTIQ+ Sensitisation Training of Law Enforcement Agencies programme. The University of Johannesburg’s LGBTI Soweto Campus Society took the best LGBTIQ+ Student Movement award and YouTube series We’re Queer My Dear got the Media Of the Year award.

In a nod to the crucial role that supportive and affirming parenting plays, Mme Felicia Leqela, actor and content creator Lumko Johnson’s mother was awarded the Best Rainbow Parenting prize.

“This year’s event demonstrated the importance of establishing and maintaining a voice that represents the LGBTIQ+ community,” comments co-founder of the Feathers, Thami Kotlolo.

“We are a large and diverse community, and the work that the Feather Awards do is part of the dialogue on issues affecting our community. Every year, the Feathers commits itself to do more work that articulates what the community is dealing with. The ongoing LGBTIQ+ dialogues in rural and peri-urban communities across South Africa collaboration with other advocacy organisations are an exemplar of the kind of work we’re about. We celebrate in a lighthearted way while recognising the important work that’s being done.”

The Feather Awards have become synonymous with outstanding stage performances, and 2019’s event did not disappoint. The Mzansi Gay Choir delivered their trademark rousing vocals, and Busiswa brought the heat to the stage. Langa Mavuso and Berita gave a moving tribute to queer love, and Moonchild and Nokwazi brought the house down with their finale number.

Ever inspiring, the Simon Nkoli Award and the African Feather of the Year trophy went to two inspiring voices from the community, Justice Edward Cameron and Namibian human rights and communications activist Linda Magano Baumann. 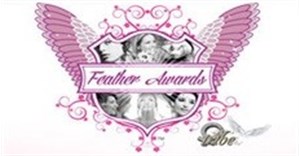