26 Mar 2013 | Email | Print |  PDF
Puma has decided to extend the Puma Social Club until 20 September, 2013. The club in Braamfontein is known for hosting hot live acts and providing party-goers with a mix of after-hours sports, local music and late-night fun. 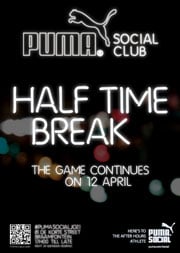 "Consumers have loved the Social Club experience as much as we've loved giving it to them," said Puma South Africa's marketing director, Brett Bellinger. "It has been an ideal space for us to interact with our consumer group. So we are calling half time; bring on the oranges, let's catch our breath and we will be back on 12 April," he added.

The club has an average of 900 patrons a week, 10 408 guests have registered on pumasocialjozi.com and a further 5326 have done so via their mobi site, with 9141 registration opt-ins for both.

Puma Social Club has showcased some of South Africa's best local music talent, such as: Desmond and the Tutus, Gazelle, The Frown, Yesterday's Pupil & Tumi, The Muffinz, Matt Suttner and Spoek Mathambo.

The Puma Social concept launched in 2010, when pop-up retail and nightlife venues around the globe were set up to pay homage to the After Hours Athletes. Puma Social Jozi has operated behind the mosaic wall at 81 De Korte Street, Braamfontein since October 2012.

To be part of the action that starts up again on 12 April, register at www.pumasocialjozi.com and your name will be put on a list at the door, or pay R20 when you arrive on the night.

For more information about the Puma Social Club, go to www.pumasocialjozi.com Become a fan on www.facebook.com/puma or follow the happenings via Twitter at @PUMA and use #PUMASocialJozi for any tweets about Puma Social.