26 Aug 2021 | Email | Print |  PDF
By: Wendell Roelf
A 329-year old South African wine estate owned by Anne Cointreau, a scion of the family famous for French cognac and orange liqueur, was sold on Wednesday to an international buyer in Europe for just over R52m ($3.5m).
The Morgenhof estate in Stellenbosch, owned for nearly three decades by Cointreau, was sold as a going concern with all furniture and cellar contents included, the lead auctioneer said, after closing its doors last year because of Covid-19.

The sprawling 210 hectare estate, with a third under vine, includes two luxury manor houses, a wedding chapel, guest cottages and a restaurant. Morgenhof can trace its roots back to 1692 and the arrival of French Huguenots in Cape Town after fleeing religious prosecution in their home country.

"Madame Cointreau has decided to retire and to go back to the family farm in France and enjoy her golden years with her grandchildren," Joff van Reenen of High Street Auctions told Reuters soon after the gavel fell.

"It's a prized asset and I've been auctioning for 32 years and this is probably the oldest property that's been auctioned off in the country at 329 years," Van Reenen said, describing the bidding as "cautious".

There was huge interest from North America, Europe and across South Africa during the virtual auction that attracted more than 100 buyers and saw around 1.4 million people view the campaign online, he added.
NextOptions
›
Email Print PDF 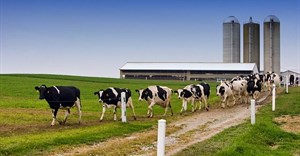