25 Jun 2010 | Email | Print |  PDF
CANNES, France: Filmmakers' competition ends on 24 June 2010 with a neck-and-neck-race between the top five entries. The winners of the 2010 Framepool/ LBB Online/ Fireflies Challenge come from the United Kingdom, Japan and the USA is a close-run race for the top spots. 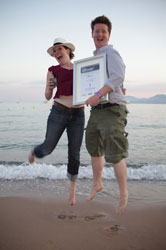 Mike and Alanna Clear celebrate their success with Leonard and Janet’s Story. 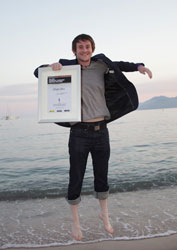 Corlin Stubbs wanted to draw attention to courageous decisions in everyday lives... and did - with Courage Inspires Courage. 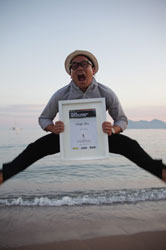 Daisuke Izumi takes a leap of faith, having won a Silver firefly for Albert II.

More than 40 filmmakers from all over the world produced remarkable short films on the topic of "courage", and were judged by a prominent jury including representatives from RSA, Publicis and BBDO. The awards took place in Cannes yesterday evening, and there will be another screening of the best five films this evening, Friday 25 June 2010.

The award for the best film of the 2010 Framepool/ LBB Online/ Fireflies Challenge goes to three filmmakers from London: Mike Clear, Rob Hughes and Ben Harrex. Their film Leonard and Janet's Story is based on a comprehensive project focusing on the secret of lasting love. Leonard and Janet are one of 120 couples Mike and his wife Alanna interviewed as they drove a motorbike and sidecar from Alaska to Patagonia, along the longest road in the world. The film combines Mike's own documentary footage with symbolic archive material visualizing the emotional agitations the couple had to face.

The film was a joint effort between the TV producers Mike Clear, Rob Hughes and editor Ben Harrex - all of whom have already successfully participated in previous industry awards.

Two young filmmakers from Japan and the USA closely followed the winning team - and as the jury couldn't separate them, they were awarded joint second place: Albert II produced by Daisuke Izumi, a young director from Tokyo. His entertaining short film tells the story of Albert II's moon landing. Not to make the film's message too "preachy", Albert II represents a monkey - albeit one played by a human actor. The film is by turns humorous and serious, varying between historical footage and Daisuke's self-shot material.

Courage Inspires Courage by Corlin Stubbs. This award-winning writer and director from Los Angeles wanted to draw attention to courageous decisions in everyday lives - not changing the world, but at least in this case, changing the life of a woman, her child and ultimately the man she is escaping. Corlin contrasted the main fictional story with footage of historical milestones from the Framepool collection.

The top five films are completed by another Japanese entry, and the collective effort of the film class from the Institute of Design in Hamburg, Germany: Mark of Courage, co-directed by Kazuhiro Morikiyo and Miyuki Saito, and Retired Love by Astrid Hüller, Christina Strauß, Nina Brandt, David Küchenthal, Markus Baier and Chad Ochs.

All these works were honoured for their outstanding creativity and professional quality. The jury for the 2010 Framepool/ LBB Online/ Fireflies Challenge consisted of some of the most respected representatives from the advertising industry, amongst them Jake Scott (RSA), Olivier Altmann (Publicis), Ringan Ledwidge (Rattling Stick), Stefan Sonnenfeld (Company 3), Sandy Watson Scott (The Fireflies), Wolf Jaiser (Framepool, 16tracks), Barnsley (The Mill), Piyush Pandey (Ogilvy), Kim Gehrig (Academy) and Steffen Gentis (BBDO)

Framepool, the footage collection run by filmmakers, and LBBOnline, the advertising community website, created this award dedicated to the Fireflies organisation. The Fireflies are committed to raising awareness and money for the fight against leukaemia. Each year amateur cyclists from the ranks of the advertising and film world participate in the "Fireflies Tour" (established in 2001) and cycle across the Alps from Geneva to Cannes. They were inspired by the courage it takes to fight cancer. In allusion to this background, contestants of the challenge were asked to craft a beautiful piece of work showing their take on the meaning of the word 'courage'. The jury of the challenge is global, highly prominent and represents many different advertising sectors: Jake Scott (RSA), Olivier Altmann (Publicis), Ringan Ledwidge (Rattling Stick), Stefan Sonnenfeld (Company 3), Sandy Watson Scott (The Fireflies), Wolf Jaiser (Framepool, 16tracks), Barnsley (The Mill), Piyush Pandey (Ogilvy), Kim Gehrig (Academy), Steffen Gentis (BBDO) and others.