26 May 2022 | Email | Print |  PDF
Celebrating contemporary African culture and heritage, The Africa Centre in Southwark, London will welcome patrons and supporters on 9 June. After years of planning and a little over 12 months of building and refurbishment work worth £5.6m, the centre is now complete. 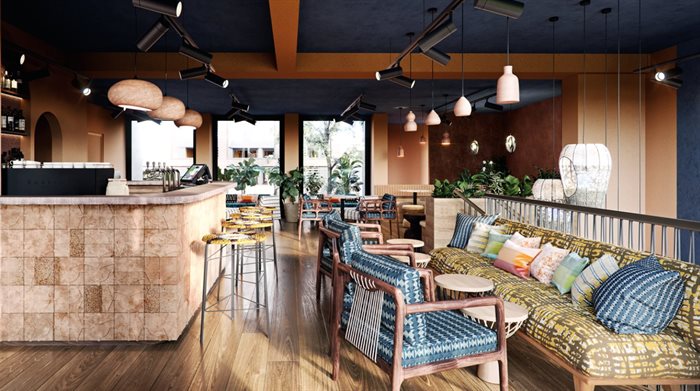 Source: The Africa Centre
Southwark was chosen for its multicultural character and its proximity to several other cultural institutions such as Tate Modern, the Southbank Centre, The Old and Young Vic theatres, Shakespeare’s Globe and the future site of the V&A East.

Spread over four floors, phase one of its redevelopment will see an African restaurant and lounge bar on the ground and first floors, and spaces for exhibitions, debates and events on the second. Phase two (to follow) plans a whole floor devoted to education, connecting the UK with Africa via interactive education initiatives teaching African history through the centre’s digitised archives as well as offering language classes. Meanwhile, the fourth floor will be a business suite offering Black businesses and individuals the opportunity to mingle, network, and grow.

Speaking about the renovation, Oba Nsugbe, board chair of The Africa Centre, said, “Over the decades, since its launch in 1964, The Africa Centre played a key role in being a home away from home for the African diaspora. It has been a safe place and key platform for African activists, intellectuals and artists to discuss and drive the African narrative.

"In addition, for a more wholesome engagement with the community, the updated centre goes beyond a focus on arts and culture to have areas dedicated to education and learning, and entrepreneurship,” Nsugbe said.

Everything from furniture, decor and paintings to food and drink in the centre’s restaurant will celebrate African culture and lifestyle. Designs by renowned artists and designers including Barthélémy Toguo from Cameroon and Mash T design studio of South Africa are found in the halls and rooms of the centre.

One of the key attractions of the centre will be the Malangatana mural which will be unveiled on the opening day.

“This has special significance as it has ties to our original home in Covent Garden. The mural was originally painted by the iconic Mozambican artist Malangatana Ngwenya in 1987. Years later when The Africa Centre relocated, the mural was carefully removed and preserved. It has now been professionally restored and will take pride of place once again in our new home. Part of the unveiling celebrations will involve Malangatana’s family, the Mozambican community in London and other notable figures from the African art space,” said Belvin Tawuya, chief marketing manager at The Africa Centre.