Nigeria and Ethiopia jail activist-journalists amid crackdown on free expression

11 Dec 2019 | Email | Print |  PDF
By: Muthoki Mumo and Jonathan Rozen
The ongoing detentions of Nigerian publisher Agba Jalingo and Ethiopian editor Fekadu Mahtemework - the only journalists behind bars for their work in their countries, according to CPJ's latest prison census - don't tell the whole story of their governments' crackdowns on freedom of expression. 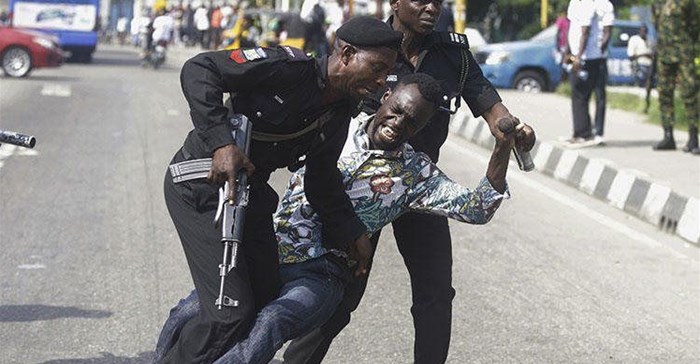 Fighting breaks out as security personnel attempt to re-arrest Nigerian activist and journalist Omoyele Sowore at the Federal High Court in Abuja, Nigeria, on December 6, 2019. Sowore and other activist-journalists have been jailed in Nigeria and Ethiopia amid a crackdown on free expression. Credit: CPJ/Reuters/Afolabi Sotunde.

Investigations throughout 2019 to compile CPJ’s list of 250 journalists imprisoned in connection with their work on December 1 identified multiple complex cases of jailed activist-journalists. These individuals’ ongoing detentions were found to be more connected with their political activities than their journalistic work.

One example is Oyomole Sowore, the Nigerian activist and journalist who founded the Sahara Reporters news website. Sowore does not appear on CPJ’s prison census. But his detention, and that of other activist-journalists arrested in Ethiopia, matters.

Sahara Reporters’ investigations into alleged corruption and other political issues in Nigeria have drawn the ire of Nigerian officials, and CPJ has documented repeated efforts over recent months to intimidate the paper’s staff and take the website offline. While CPJ continues to investigate Sowore’s case, information available indicates Sowore’s August arrest was connected to his organization of nationwide protests calling for improved governance under the slogan #RevolutionNow.

Sowore’s detention grabbed the world’s attention in part because of the wider, ongoing crackdown on free expression in Nigeria, including violence against journalists covering protests he organized and calling for his release, according to CPJ research and media reports.

Similar to Nigeria, CPJ research indicates old tools of censorship have re-emerged across Ethiopia to silence dissenting voices, despite the reforms made under Prime Minister Abiy Ahmed. The arrest and detention of activist-journalists in Ethiopia may be less widely publicized, but they are equally alarming.

In July, as Ethiopia’s southern region erupted into protests and violence over a delayed statehood referendum, authorities shut down internet access, closed the local office of the Sidama Media Network (SMN) for several days, and arrested at least 900 people, according to CPJ research from the time, a DW Amharic report on Facebook, and media reports including the Addis Standard news website.

Getahun Dagoye Darimo and Tariku Lemma Wakayo, two SMN managers, and Belay Belguda Naro, an SMN board member, were part of the arrests, according to an August statement from the station and CPJ research at the time that called for authorities to make clear the cases against them. All three were vocal in the Sidama statehood movement and Belay served in the leadership of a statehood preparation taskforce, three colleagues and one independent journalist who is familiar with their case told CPJ on the condition of anonymity for fear of reprisal.

Accused with six others of inflaming political tensions and attempting to overthrow the constitutional order, Getahun, Tariku, and Belay remained in detention as of publication, according to court documents reviewed by CPJ and reporting by the DW Amharic service.

Adunya Keso and Gada Bulti, two contributors to the Afaan Oromo online media outlet Sagalee Qeerroo Bilisumaa, have also remained in detention since their September arrest with three now freed colleagues--Firomsa Bekele, Abdi Guteta, and Bikila Amenu, their lawyer Milkyas Bulcha told CPJ. All five were accused of terrorism, but never questioned about their journalism, according to Firomsa. The station is associated with the Qeerroo youth movement, of which Adunya and Gada were both participants and whose protests helped usher reform in Ethiopia, according to multiple people who are familiar with their work and who spoke to CPJ.

Yazew Kebebew, another Addis-based activist-journalist who until recently managed the Oromia News Network (ONN), was arrested in October 28, alongside two other now-freed individuals, Iffaa Garmachu and Seyoum Bediye, Iffaa told CPJ. Yazew, who is also a member of the opposition Oromo Liberation Front (OLF) group, lived in exile for years because of his activism and is accused of training a militant group, according to Iffaa and a report by U.S. Congress-funded Voice of America. Four people familiar with Yazew’s case who spoke to CPJ all said they believed his political activities to be the primary reason for his arrest.

While CPJ continues to investigate their cases, Sowore and these six Ethiopian journalists do not appear on CPJ’s 2019 prison census based on the report’s methodology and a careful evaluation of the evidence available at the time of publishing. But their detentions are symptomatic of both countries’ wider crackdowns on freedom of expression, upon which press freedom also depends.

About Muthoki Mumo and Jonathan Rozen

Muthoki Mumo is CPJ's sub-Saharan Africa representative, and is based in Nairobi, Kenya. She previously worked for six years as a journalist with the Nation Media Group, and has a master's in journalism and globalisation from the University of Hamburg. Jonathan Rozen is CPJ's senior Africa researcher. Previously, he worked in South Africa, Mozambique, and Canada with the Institute for Security Studies, assessing Mozambican peace-building processes. Rozen was a UN correspondent for IPS News and has written for Al-Jazeera English and the International Peace Institute. He speaks English and French.
Read more: Committee to Protect Journalists, Nigeria press freedom, Muthoki Mumo, Jonathan Rozen