25 Jan 2008 | Email | Print |  PDF
Cost inflation has compounded the problems facing the UK's footwear specialists, according to the latest report* from Verdict Research, part of the Datamonitor group.

Despite rising costs, footwear retailers are unable to raise prices due to the high level of competition in the market – particularly from clothing retailers. As a result, even the UK's largest footwear specialists continue to suffer despite shoppers' growing appetite for new footwear.

According to Verdict Research, of the UK's Top 10 footwear specialists, eight either saw profit margins fall or made a loss during 2006**, and in 2007 this trend will have continued for most specialists. Indeed, footwear chain Dolcis has now been placed in administration – becoming 2008's first high profile casualty in the sector.

One of the biggest problems plaguing footwear specialists is cost inflation, not least from the EU anti-dumping tariffs***, which exacerbated more general retail issues of higher rents, fuel costs and energy prices.

Clothing retailers and other non-specialists are also facing higher costs in footwear but, as typically larger organisations, they are in a better position to withstand these pressures.

But the problem is not just cost inflation. According to Verdict Research, footwear specialists accounted for over half of all UK footwear sales in 2001 – a figure that has fallen to an estimated 41.8% of footwear sales in 2007 as consumers increasingly turn to clothing retailers, supermarkets and sporting goods retailers to pick up their footwear. Over 2007, clothing retailers were the biggest winners in the footwear market – with New Look performing particularly well.

"Specialists have fought against the growing competition by opening new stores to fuel sales growth but, with sector profitability sliding, this is compounding their problems," says Verdict Research retail analyst Carol Ratcliffe. "Footwear retailers need to focus on improving sales densities in their existing stores before adding new outlets. While many have already invested in developing new store formats, they need to accelerate these efforts to catch up with the rising standards set by clothing specialists."

Despite this, competition is also serving to reinvigorate interest in shoes. Volumes have been growing as low price options allow everyone to update their shoe collection more often, while the more frequent exposure to shoe ranges heightens awareness and interest.

Indeed, Verdict Research estimates that the footwear market in the UK grew by 4.6% in 2007 reaching £5,484 million, demonstrating a major improvement on 2006's weak 0.7% growth. This is the footwear market's fastest rate of growth since 2003. The unseasonably wet summer in 2007 will have also aided the value of footwear sales, with shoes and boots the most sensible purchases, meaning a greater number of higher priced sales.

This has been further supported by a degree of trading up on the part of consumers, who can buy better quality or more fashionable products for the same price as they might have bought something simpler or lower quality only a few years ago. 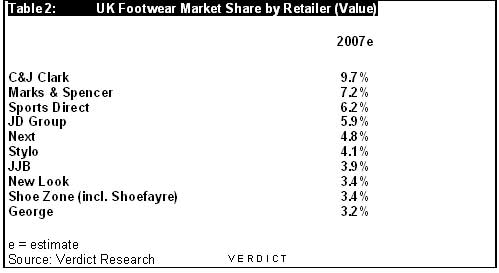 #WomensMonth: An entrepreneur with a lot of heart and sole13 Aug 2018 Shoes that show you where you're going1 Sep 2014 Retailers get savvy with sharp rise in e-commerce27 Sep 2013