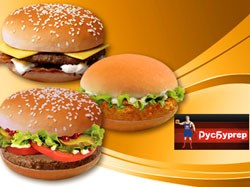 (Composite image from elements extracted from the RusBurger website)

Crimean fans of McDonald's have plenty to chew on after a Russian burger chain said on Thursday it was taking over the US food giant's restaurants in the annexed peninsula.

"A RusBurger restaurant will open in the place of an old McDonald's" in Sevastopol, the largest city in Crimea, an executive of the Russian chain told AFP.

Workers were already busy installing furniture in the new restaurant, with the iconic golden arches replaced by the bright red insignia of RusBurger.

In April, the American food giant announced it was "temporarily" closing its three franchises in the former Ukrainian territory, blaming the suspension of banking services after Crimea's annexation by Russia.

McDonald's has removed the addresses of its Crimean restaurants from its website but has not indicated for how long it would cease operations there.

The Russian director of Burger King, McDonald's fierce rival, announced in April his chain was eying up the firm's Crimean real estate, although this was later denied by a Burger King spokesperson in the United States.